A few months after the accident. 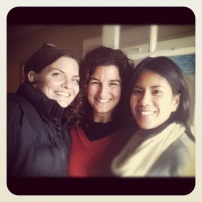 6 months after!  Doctors have told Cheryl that she has healed as quickly as a child.

Candice and I met Cheryl Galante this week.   This is an excerpt from an article written in  NJ.Com by Craig Wolff.

Cheryl Galante learned the virtue of being still when she lost control of her car on a rainy afternoon in May. When the vehicle came to rest, still upright, it had crossed six lanes of traffic and spun around. She was facing east in the express lanes of 78 west, staring over a spent air bag at what looked like smoke rushing from below the crumpled hood. Her thumb twitched on the seat belt latch.

She heard a voice, a man at her door, telling her, “Don’t move. Be still.”

In a haze, she could not decipher the face except that it was kind. She made out a black T-shirt and grabbed at it.

He placed one hand, then another, on her neck, and said, “Please, you must be still.”

Nothing made sense to her, except for his voice, calm and unyielding, and these sure hands, which restrained her, and cradled her. For nearly 30 minutes until an ambulance arrived, while nothing indicated a devastating injury, his hands stayed right there.

The discovery was made later at University Hospital in Newark that she had a bilateral fracture of the C2 vertebra in her neck, known as a “hangman’s break.”

Had she tried to flee the car or merely been allowed to turn in her frenzy, her doctors now say, the odds are she would be a quadriplegic, or she would have died.

Cheryl Galante, 52 years old, from Maplewood, was not pulled from a burning building. No one shielded her from bullets or stepped into the path of a speeding train. She was spared by an act heroic in its simplicity.

….From inside her halo, she said, the world appears filled with the helter-skelter of people rushing about their lives. She is grateful for an opportunity her accident gave her, to be stilled for a time, and to watch. The universe has slowed for her, she said.

To read the full article and to watch a 2 minute video click here.

8 thoughts on “Day 35: This one will take your breath away.”

Shout out to The Gratitude Graffiti Project

"Thank you for sharing your kind comments with us. I am happy to learn that your town enjoys using Crayola(R) Window Crayons. Our company receives hundreds of letters and e-mails each week. Most are inquiries for product information. Few people take the time to write and share their thoughts and experiences with us. We appreciate your contact, and hope you continue to choose Crayola products for your creative needs." Colorfully yours, Bridget Weiss Consumer Affairs Lead Representative CRAYOLA

Kudos from The Project for Public Spaces

"The Gratitude Graffiti Project is a great example of how individuals who are passionate about their places can take a Lighter, Quicker, Cheaper approach to engaging with their neighbors in public spaces. It not only connects people with each other and supports local businesses, it does so in a way that boosts morale in the town by reminding people to take the time we so often forget to take to reflect on the things in our lives that we are most grateful for." -Project for Public Spaces, pps.org

Praise from the Hilton Neighborhood Association

"The Gratitude Graffiti Project allows neighbors to interact in a very positive, meaningful and effortless way. By spreading gratitude, we can appreciate where we live, who we live with and where we come from. Nothing speaks to a sense of community more than that. " -The Hilton Neighborhood Association, Maplewood, NJ

Gratitude is a good look at the Hair Chalet

"This was a powerful,heartfelt,statement of gratitude expression, and the timing could not have been better.. After the storm,(Hurricane Sandy), our clients, young and old alike, still had an abundance of gratitude to report.. The response was overwhelmingly positive,and we're "GREATFUL" to have been participants, we can't wait for the next project."~Kathy Blair, the Hair Chalet